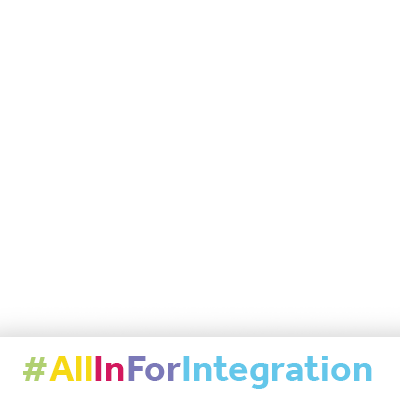 On the World Refugee Day, the organisations working together on the international research project NIEM have begun a social media campaign #AllInFo...
Login to Add Twibbon

On the World Refugee Day, the organisations working together on the international research project NIEM have begun a social media campaign #AllInFo... more →

On the World Refugee Day, the organisations working together on the international research project NIEM have begun a social media campaign #AllInForIntegration in order to draw public attention to the need for a more efficient and effective integration policy that better addresses the needs of refugees. Using the hashtag #AllInForIntegration, activists and researchers supporting the campaign have been posting pictures of themselves holding a white card with the #AllInForIntegration slogan on it. In Germany, female refugees from Syria, for the first time in their lives, learn how to ride a bicycle, which gives them the sense of dignity and independence. Children of the refugees living in Greece attend IT and coding courses. Refugees from Afghanistan integrate with the Swedish society by playing cricket. In Poland, refugees from conflict regions run a multicultural diner which is, at the same time, a place of social dialogue. As numerous examples show, integration of refugees in the European Union member states may take place in different ways, bringing more or less lasting effects. However, in the light of the challenges facing the common European asylum policy and the limited integration-related action in some EU member states, integration would not be possible without the hundreds of non-governmental organisations, public institutions, local communities and private entities involved in grassroots efforts to prevent social marginalisation of refugees. Therefore today, on the World Refugee Day, civil society organisations and academic centres from 15 European Union member states implementing the NIEM project wish to emphasise even stronger the role of the European community in facilitating the smooth transition of refugees into a new life and in helping them find their own place in the European reality. They state with emphasis: Integration of refugees is a task that we all face – we must all get involved! More information: www.forintegration.eu
Close