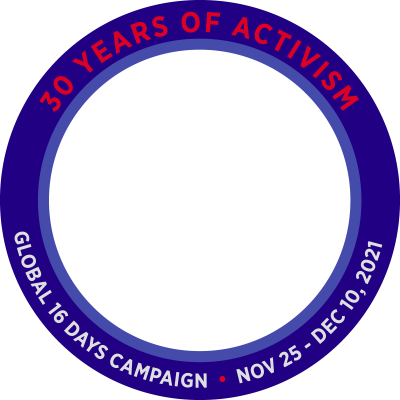 The Global 16 Days Campaign, launched by Center for Women’s Global Leadership (CWGL) at its first Women’s Global Leadership Institute in 1991 with feminists from around the world, has been used worldwide to call for the elimination of gender-based violence (GBV). The Campaign is run annually from November 25 (International Day Against Violence Against Women) to December 10 (International Human Rights Day). 2021 marks the 30th anniversary of the Global 16 Days Campaign. Inspired by the original vision and history of the Campaign, which focused on raising awareness about violence against women (VAW), and considering the continuing impunity for femicide, this year the Campaign will focus on the issue of “femicide or the gender-related killing of women.” In 2021, in addition to the anniversary theme, the Campaign will continue its program activities to end gender-based violence (GBV) in the world of work by focusing on the link between domestic violence and the world of work, drawing on legal standards outlined in ILO Convention 190 (C190) and the actions put forward in Recommendation 206 (R206).
Close